What is the Future of Advanced Automation and Robotics Jobs? 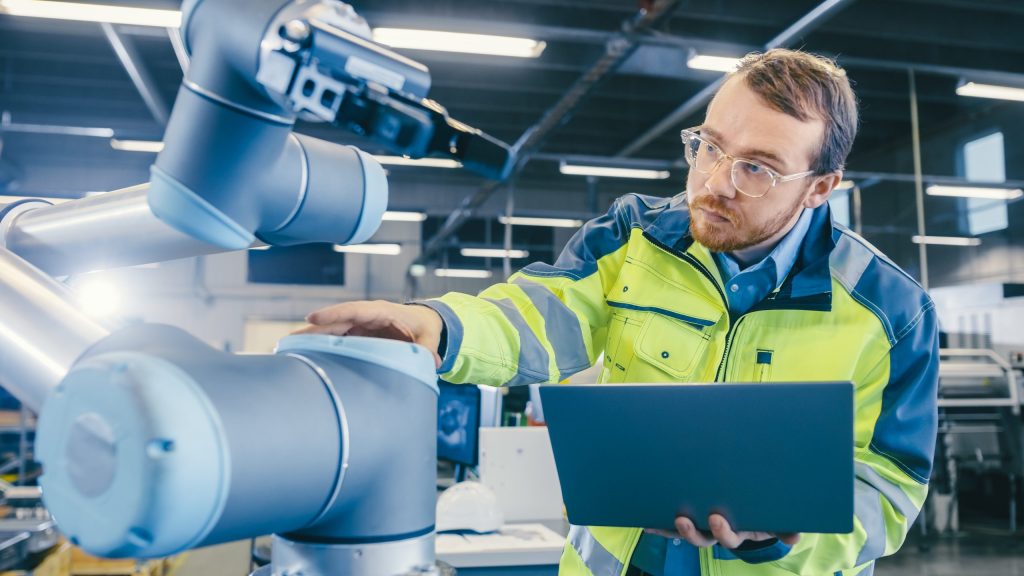 The fourth industrial revolution, dubbed Industry 4.0, is here, and the relatively newly established role of robotics in manufacturing that it brings with it  is causing a lot of excitement around the world. Production output is growing stronger, process efficiency is increasing, and technology is being utilized in ways that we’ve never seen before in a variety of industries.

So what does that mean for the workforce? Well, it basically means we need a whole new range of workers who are trained to operate, program, troubleshoot, design, install, and essentially work alongside all of these robots.

A question that is often brought up alongside any discussion about automation or robotics in the workplace is “Will these machines replace me in the workplace?” That’s a valid concern that comes from a logical place. The answer, however, is absolutely not. Rather than taking jobs away from people, robotics introduces a whole new massive array of job opportunities, jobs which need to be filled sooner rather than later.

Let’s take a look into the future of advanced automation and robotics jobs, and think about what that might look like for the workforce.

The Next Ten Years

A report by The Manufacturing Institute and Deloitte finds that 4.6 million manufacturing jobs will need to be filled in the U.S. alone over the next decade. Of those jobs, the report predicts that up to 2.4 million might not be filled due to a lack of training.

That may sound like dire news, but we find it to be quite the opposite. It means there will be millions of opportunities over the next decade for people who find themselves interested in working alongside some of the most advanced robots to date.

The biggest challenge isn’t actually the training. It’s informing people who are interested, but maybe thinking that a career in robotics is outside of their educational background or beyond the realm of possibility.

Well, that’s just not the case. The reality is quite the opposite. The need for skilled workers in industry 4.0 is immense, and that means that there’s a sense of urgency in offering accessible training to potential workers.

There’s Never Been A Better Time to Work with Robots

Not only are manufacturers scrambling to get potential employees into training, but that training might not be what you think it is.

One of the more entry-level jobs in robotics, the robotics technician, places the worker in a position to be the subject matter expert when it comes to operation and troubleshooting of a robot on the manufacturing floor. That means a lot of hands-on training and interactive learning on-the-job.

So when we say “training,” especially for the robotics technician, we don’t necessarily mean academics or expensive college degrees. We’re talking about taking people who maybe already have a base level understanding of mechanics, and training them to apply that understanding to the world of robotics.

Basically, a person with mechanical aptitude simply needs to learn how to translate that aptitude into an understanding of robotics from the operational level, and that’s best done through on-the-job training.

Suddenly, the auto mechanic who dreams of working with robotics is only some training and a career change away from being on the ground floor of a technological revolution.

This is why Roboticscareer.org exists, to communicate the possibilities of a future in robotics to anybody who’s interested. The challenge is spreading the word that the first steps of a fulfilling and challenging career with endless opportunities for advancement and growth is literally right here at your fingertips.

What will robotics and advanced automation mean 20 years from now? How about 50, or even 100 years? The exciting part is that we don’t exactly know, but we can imagine.

Currently, AI technology is making progress at incredible rates. We could see AI-controlled logistics on a mass scale. We could see robotics-driven vehicles delivering supplies to manufacturers all around the globe, and then even to consumers at their door steps. Real-time data can provide better routing for transportation.

In laboratories, robots are already aiding with testing and research processes, automating procedures that might even be hazardous for scientists. The pandemic alone has already propelled developments in automation in laboratory environments that will have lasting impact and lead to unforeseen benefits in medical and scientific fields.

What we can safely predict is that wherever there’s a robot, there is a need for people to design, program, monitor, troubleshoot, and operate that robot. There will always be an increasing need for trained workers in the world of advanced automation and robotics, and there’s no reason for somebody who’s interested to put off jumping in feet first. How to Use RoboticsCareer.org — Education Seeker (Search)Robotics Careers in Manufacturing